Sri Ganganagar (Raj.): Chanana Dham will continue till October 8, after which there will be Jagran. These days the annual festival is being celebrated in the Hanuman temple of Chanana Dham in the Padampur area of ​​the district. The annual event is held in the temple every year after the Shardiya Navratri. In this sequence, it started on Wednesday. Now, till October 8, continuous Ramnaam sankirtana will continue. Different people have been given responsibility for Sankirtana in the temple, while Bhandara is also arranged for the visiting devotees. Hundreds of people are eating food every day in the Bhandara.

in the temple, four teams have been formed for round-the-clock sankirtana. Each team is doing sankirtana in three shifts of two hours each. Their timing is fixed. A new team arrives after the stipulated time. The old team helps in other arrangements of the temple. The temple has great importance in the area. In such a situation, a large number of people from Sriganganagar go for darshan.

The Sankirtana started on Wednesday with the worship of Ganesh Darbar, Ram Darbar, Veer Bajrang Bali, Bhandara and Yagyashala. After the worship, Sankirtana was started. The entire team including the temple committee chairman Rakesh Goyal, minister Gopiram Bagadia is responsible for organizing the event. On October 8, the sankirtana will continue till 5.15 pm. After this there will be a Jagran in the night. 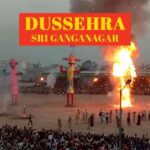