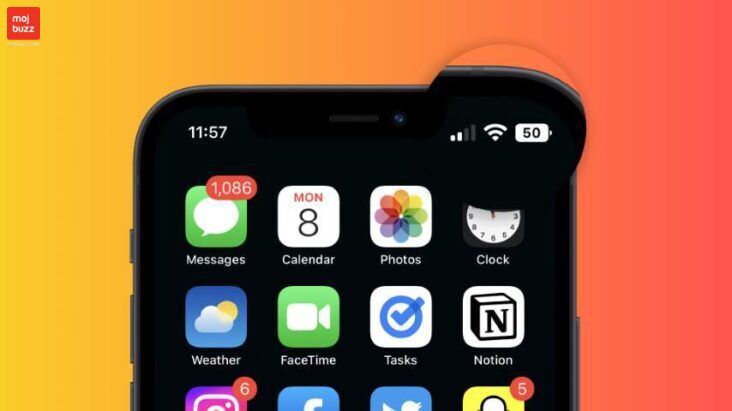 You can roughly estimate how much battery life you still have when you look at the battery icon on your iPhone. However, if you want to know your actual situation, you must scroll down from the top right of the screen into Control Center, where Apple has kept the battery level hidden for years.

This is not how things used to be. Apple first offered all iPhone users the ability to view the battery level in the menu bar. But then, your brand-new iPhone lost one of its features when Apple unceremoniously changed things with the release of the iPhone X.

Why am I unable to view the battery percentage iPhone?

Apple gave users of all iPhones with a Home button the option to choose whether or not to display the battery percentage, whether they had an iPhone 8 or an iPhone SE. The iPhone X and other iPhones like it have never had this option. Despite the fact that the battery icon on “X-style” iPhones is positioned in the top-right corner near the notch, Apple never provided an explanation for their reasoning in this case.

Since the iPhones with the home button have a consistent 16:9 display without a notch, adding that extra digit doesn’t enlarge the screen.

But Apple altered its mind, giving Face ID iPhones for the first time access to the battery percentage option with iOS 16. Yet there are two restrictions.

The first is just temporary: To access the functionality, your iPhone must be running the most recent developer beta of iOS 16, which is developer beta 5. Public testers will soon be able to test out the functionality as Apple is scheduled to release the most recent public beta for iOS 16 at 1 p.m. ET today, Aug. 9. You can install the beta on your iPhone by following the instructions provided here if you’re interested.

When Apple releases iOS 16 to all compatible devices in the autumn, you will be able to test out the battery percentage option on your iPhone if you don’t want to accept any of the risks associated with installing beta software on your phone.

Not all iPhones running iOS 16 will, however, receive the feature. Apple removed a few iPhones from the list, some new and others old, for an unknown reason. The current lineup of gadgets that work with battery percentage is as follows:

This implies that the iPhone 13 mini, iPhone 12 mini, iPhone 11, and iPhone XR still lack the capability to display your battery level at all times. It’s business as usual for these phones, but it’s odd that Apple didn’t include the choice.

Apple might not be sure it can properly accommodate the battery % on the smaller displays of the minis or the lower resolution screens of the 11 and XR. Nevertheless, Apple might decide to include the feature on these phones after all as iOS 16 is still under testing. Just wait for upcoming beta releases or the release of iOS 16 to find out.

See the iPhone battery percentage in the status bar

If your iPhone is running iOS 16 and you don’t own one of the missing iPhones stated above, you can enable your battery % with only a few clicks by doing the following:

Tap the toggle next to Battery Percentage by going to Settings > Battery. Your battery % will then appear in the center of your battery symbol on a Face ID iPhone.

The full battery of your iPhone goes green when you charge it with this setting enabled; yellow appears when you enable Low Power Mode, and red when the battery level drops to 20% or below. However, these unique capabilities are exclusive to iPhones with Face ID.

If your iPhone includes a Home button, you won’t see the new color schemes or designs; instead, you’ll only see the battery percentage show up to the left of your battery icon.